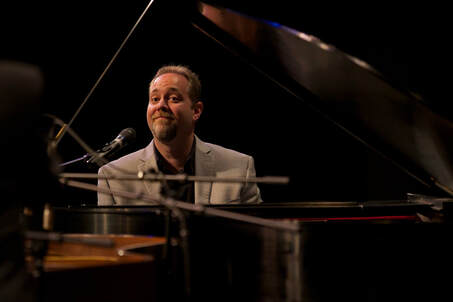 Brian Holland
Brian Holland (piano) is an internationally renowned pianist, composer, recording artist, and entertainer who has enjoyed a music career spanning more than 40 years. Brian spent his formative youth playing in pizza parlors and clubs throughout Indiana and the Midwest. In 1999, he won his third consecutive title in the World Old-Time Piano Playing Championships, and was retired from competition.

Brian has performed with some of the hottest jazz bands in the US - Holland-Coots Jazz Quintet, Big B.A.D. Rhythm, GROOVUS, Holland-Coots Swingin' West, and others - and has traveled all over the world performing his creative styles of jazz, ragtime, stride, swing, boogie, and blues.

Brian has multiple solo and ensemble recordings to his credit (available at www.shanesmohawk.com), and earned a Grammy nomination for his work with Bud Dresser on their 2006 album, "Ragtime-Goodtime-Jazz".

"Brian Holland has to be one of the fastest, cleanest players anywhere today. Every note, no matter how swift, is as sparkling clear as Waterford crystal. His touch is assured and he makes even the most complex passages sound easy."
- Jack Rummel, prominent reviewer & performer

"Brian Holland's lightening-fast left hand bangs out a clean, steady rhythm while his right hand skitters up and down the keyboard rendering the melody in thick chords. Watching his energy and dexterity is narcotic."
- The New York Sun 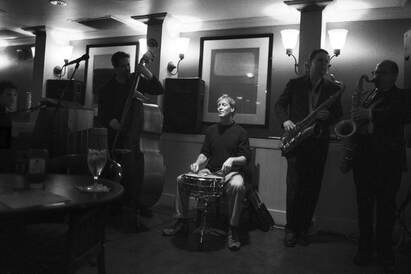 Danny Coots
Danny Coots (drums)
​It was 1964 in upstate New York when Danny Coots began playing drums at the tender age of 6 years old. Since then, he has studied with Nick Baffaro, Rich Holly, Alan Koffman and Jim Petercsak in percussion.

In 1996 Danny moved to Nashville, Tennessee and has lived there ever since. Danny has recorded extensively in Nashville, New York and L.A. and has appeared in over 100 countries. He has played on over 100 recordings, one of which won a Grammy in 2005. 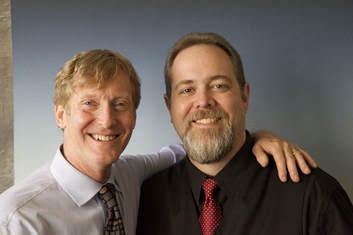 Danny Coots, Brian Holland
​“Exciting, exhilarating, and exhausting!” is probably the best (and most alliterative) way to describe the jazz duo of Holland & Coots. Brian Holland and Danny Coots began performing together in 2010 after spending decades individually on the jazz and ragtime circuits honing their skills on piano and drums, respectively.  Since joining forces, they’ve been on a mission to introduce audiences all over the world to their style of music and fun.  With a delightful mix of jazz, blues, stride, boogie, pop, and ragtime, Holland & Coots have created something for every taste.  This winning duo is the driving rhythmic foundation for bands like B.A.D. Rhythm, and the newly-formed Holland-Coots Jazz Quintet. CDs are available at www.shanesmohawk.com.

"Holland and Coots take you on a musical journey that radiates joyful ebullience one moment and wistful lyricism the next."
- Bryan Wright, owner Rivermont Records

"[They] should come with seat belts and a warning about excessive amounts of white-knuckle, adrenaline-charged, exuberant effervescence!"
- Tony Caramia, Director of Pedagogy Studies, Eastman School of Music, regarding Holland, Coots, and Spitznagel's recording "Three's Company"

"[This] is ... piano music at its best, presented in great variety, performed by superb musicians..."
- Max Morath, regarding Holland, Coots, and Wright's recording "Live from Buenos Aires"

​B.A.D. Rhythm is a swingin' jazz trio comprised of Brian Holland (piano), Andy Reiss (guitar), and Danny Coots (drums). When Holland & Coots went into Music Row's Funhouse Studio to create their fifth duo album, Danny's friend Andy Reiss (Nashville legendary guitarist) had planned to drop by for a visit. What he didn't plan on was being asked to be a part of the recording and a new trio! Andy happily obliged, and B.A.D. Rhythm was born. Since that fateful day (actually two days and 26 hours in the studio), the band has expanded to add another Nashville luminary, Pat Bergeson on guitar and harmonica, and San Francisco-based bassist, Sam Rocha, to form BIG B.A.D. Rhythm! They have become a mainstay at the Arizona Classic Jazz Festival, and will return again in November 2018 and 2019! Holland-Coots Jazz Quintet
Since their auspicious debut at the 2017 Durango Ragtime and Early Jazz Festival, the Holland-Coots Jazz Quintet has amazed the jazz and ragtime world with their energy, musicality, and humor. As a group, they work together as brothers – each a wonderful soloist and an absolute marvel as a team player, ready to be lyrical or hot, bluesy, rampaging, or sentimental. The HCJQ recorded their first CD in July 2017, a tribute to the great Thomas “Fats” Waller called This Is So Nice It Must Be Illegal, which was met with radiant reviews.

“Their expression of musical creativity, lyrical, warm, sometimes hilarious, celebrates the joyous merrymaker, but it is more an outpouring of devotion for Fats and what he did so open-heartedly ... the band made magic happen, song after song.” –Michael Steinman, Jazz Lives

“The spirit of Waller’s music is captured by these cats, but they put their own stamp on it.  Each of the players is a first-rate exponent of playing classic jazz.”
–Joseph Lang, Jersey Jazz

​The son of a jazz trombonist, Marc has been listening to classic jazz his entire life.   A specialist in the jazz trumpet styles of the 1920’s and ‘30s, he also started a deep interest in jazz history when he began collecting records in his early teens.  His first job in a jazz band was at the age of 15, and since then he has performed and recorded with many groups around the world.  In 1999 he researched and produced the album ‘Music Of The Bolden Era’ for Stomp Off Records, recreating the music of Buddy Bolden’s band.   He has also recorded with Hal Smith’s Rhythmakers, Narvin Kimball’s All Stars, Carl Sonny Leyland, Clint Baker’s New Orleans Jazz Band, the New El Dorado Jazz Band, the Reynolds Brothers, the High Sierra Jazz Band and Barbara Dane, as well as with his own groups and with his wife, vocalist Dawn Lambeth.   Marc currently plays trumpet with the High Sierra Jazz Band, Carl Sonny Leyland’s House Party and the Ivory Club Boys.  His goal is to carry on the traditions of the great early jazz trumpet players.

Hailing from Vancouver, Canada, Evan was raised in a musical family and was instructed in early New Orleans-style jazz from the age of seven. He has performed all over the United States and Canada, as well as in Europe, Japan and China. Evan relocated to New York City in 2014 and performs regularly at some of NYC’s finest venues, such as Birdland, Jazz at Lincoln Center, and the Ear Inn with some of the city’s most prominent artists, such as Catherine Russell (2016 Grammy nominee), Bria Skonberg (2017 Hot House Award: Best Trumpet) and Vince Giordano’s Nighthawks (2012 Grammy Winner).

*Evan played reeds on HCJQ's Fats Waller Tribute CD, "This Is So Nice, It Must Be Illegal." Seattle-based saxophonist and clarinetist Jacob Zimmerman plays creative, swinging jazz for listeners and dancers. On top of leading "Jacob Zimmerman & His Pals" he has performed with jazz groups including Rachael & Vilray, the Jonathan Stout Orchestra, and The Fat Babies. His playing is melodic and spontaneous in the spirit of his heroes: Bix Beiderbecke and Lester Young.

Steve Pikal (upright bass) has been playing music professionally for many years and is highly regarded as a first call bass player from the Minnesota twin cities area jazz scene.

He has had the pleasure of working with many top performers and bands over the years. Some of his credits include the Jim Cullum Jazz band,  Butch Miles, Artie Shaw Orchestra, the Barbary Coast Dixieland Show band, Dick Hyman, Danny Coots, the Wolverines Big band, Butch Thompson, Hal Smith, John Cocuzzi, Jeff Barnhart, The Midiri Brothers, and the Bill Evans New Orleans Jazz band. 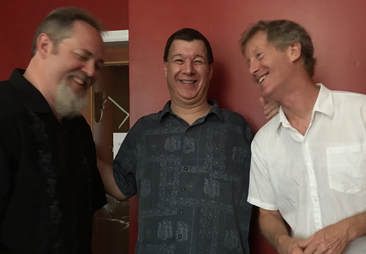 GROOVUS: Brian Holland, Steve Pikal, Danny Coots
"Why stop when you got a good thing going?" - Someone, I'm sure

​The Holland & Coots "brand" continues to grow and evolve. The latest incarnation features the aforementioned duo adding the craziest bassist on this (or any other) planet, Steve Pikal! Oh yeah, things are about to get nuts.

The word GROOVUS! is actually derived from an early form of Latin - created long before the Indo-European folks got ahold of it and turned it into something decent - that, loosely translated means, "Holy crap that swings!" At least that's what Danny Coots tells us (apparently his Latin teacher, Mrs. Christopher, was quite the story-teller).

Their debut album, All We Know, features an absolute cornucopia of jazz-related styles that will keep even the most hardened jazz critic interested. Our dear friend and Jazz Aficionado, Michael Steinman, wrote in his liner notes, "Brian, Steve, and Danny – heartfelt tumblers and jugglers – create MUSIC that makes us feel.  We remember sunrises, cool water, grateful breathing, hugs. The Sages describe many routes to enlightenment, but their advice is really “Find your Groove and Groove with others who Understand.” The universe has its own joyous rhythm – we feel it in the womb, in the waves.  Count Basie had it even when he had to ride a scooter onstage. GROOVUS is so well-named; this trio sends the right vibrations without ever frightening the new puppy."

Seriously, what grooves better than that? 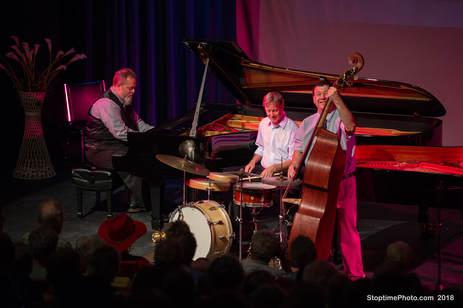